First of all, I want to thank everyone who prayed for my mother-in-law.  She had surgery yesterday, and all went well.  Hopefully she will get to come home today.  Thanks again for your prayers.  They are appreciated more than you know.

I wanted to share with you what our pastor preached on this past Sunday morning.  He read the account in the Book of Acts, the third chapter.  You know the story.  Peter and John were headed into the temple, and were stopped by a lame man begging for money.  Peter and John looked at him, and Peter said "silver and gold I do not have, but what I do have I give you: In the name of Jesus Christ of Nazareth, rise up and walk."  Then he took him by the hand, lifted him up, and immediately the man was healed.

Our pastor asked a question that really got me to thinking.  "What would two modern day preachers, walking by a person in a wheelchair begging for money do?"  He suggested that they would probably come back to church and form a committee to research beggars in the community.  He also suggested that they might be really concerned with this man's comfort while begging, and hold a fundraiser to raise money for an umbrella to shade the man while he is sitting there asking for money.  The church might even have made a donation to him.  But how many preachers would have stopped what they were doing, walked right up to him, prayed for him, and then taken him by the hand and lifted him up out of the wheelchair FULLY EXPECTING him to walk??

You know what, I think our preacher was right.  I think most of us would have the same thought.  Either give him some money, or, try to ignore him and keep on walking.  I've done it.  But I have NEVER walked up to a lame person and said "you don't need money, you need Jesus."

So why have things changed in 2,000 years?  The disciples didn't go around holding meetings to decide what to do.  They went about being the hands and feet of Jesus.  They preached, they served, they prayed.  They were ridiculed, they were threatened, but still, they did what Jesus would have done.  No matter what the cost.

Jesus is still the same Jesus today as He was in the first century.  He still loves, He still saves, He still heals.  But, I think the church today is a far cry from what the first century church was.  Am I willing to do what Jesus would have done no matter the cost?  Do I keep myself so close to the Lord that my Spirit is ready to hear His still small voice, and is my faith strong enough to act upon it?  If He told me to go and pray instead of dig in my wallet would I do it?  Could I do it?

Boy I would sure love it if all my blogging friends would be in prayer for my mother-in-law.  She fell Friday evening and has fractured her shoulder.  Unfortunately, it is a very bad break.  She is in the hospital now, and the specialist is planning to operate on Monday.

Please pray for complete healing of that shoulder.  Agree with me for God to guide the hands of the doctor, and nurses, all who will come in contact with my mother-in-law.  We are praying for comfort and for rest for her pre-surgery, and a total recover post-surgery.

Yesterday I attended a high school graduation . . . for my son, Cole.  It was a day we had known was coming for 18 years.  A day we had planned for for months.  We had ordered invitations, had senior pictures taken, made plans for a big graduation party.  And still, as I stood there watching him walk in to the traditional Pomp & Circumstance, it was almost like a dream.  He can't be eighteen years old.  He can't be graduating from high school.  My little boy.  But there he was, in his maroon cap and gown, with the National Honor Society sash, and Honors Diploma gold rope braid hanging down.  He looked so handsome, smiling, so excited.  And while I was proud beyond belief, of course there was sadness too.  Excitement for him and his accomplishments, and sad because I know that adulthood brings responsibilities.  Responsibilities that his dad and I have carried for him for 18 years that now, he will begin to carry.

It's not like anything really is changing immediately for him.  He still went to school today . . . to work on the flat bed trailer he is finishing in Ag class.  He got a nearly FULL scholarship to a local university, and will be living at home and driving to school come August.  But still, he has stepped into a new phase of life.  I don't know that he fully realizes it yet, but he has.  Thankfully, I still have a few more years to prepare myself for the day when he REALLY is on his own.  A few more years to influence him.  A few more years of having him all to myself. 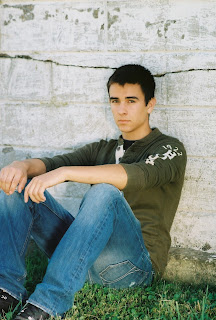 My sweet friend Carrie over at Farming On Faith is having a giveaway.  If you are a regular follower of Carrie, (and if you aren't then WHY aren't you?? ), you know that Carrie loves all things Amish.  I must admit that I hadn't read any Amish books until recenly, and I'll tell you I am hooked.  The stories are so interesting.  The lifestyle of the Amish reminds me of a simpler time.  And these days with life so hectic, who doesn't long for SIMPLE?

HERE is the link to Carrie's giveaway post.  So head on over and enter for a chance to win the book "Paradise Valley" by Dale Cramer.  I KNOW you will LOVE IT!

What a beautiful day we are going to have today.  The sun is shining here.  It's a little bit chilly.  Really chilly for the 4th of May in Missouri, but at least it isn't raining.

I got up this morning and went into town to walk my usual three miles, and as I was walking around the track I pondered just how very blessed most of us are.  Oh, I know there are people today enduring terrible situations.  Sickness, death, problems with children, or spouses, or parents.  And for those people I said a prayer.  But for most of us, myself included, life is just pretty good.

I have a house to live in, and bed to sleep on.  I have a family who loves me, and I love them.  I have a refrigerator full of food.  I have a car to take me where I need to go.  I have a job to go to.  And most of all, I know the Savior, Jesus Christ. He is with me every step of this wonderful life of mine.  He strengthens me for the hard times, and gives me His joy.  He encourages me when I get discouraged and want to just throw in the towel.  He comforts me when my heart is broken.  He loves me in spite of all my faults and failures.

I came back home from walking and started a load of laundry.  Thank you God for electricity, and for my washer and dryer. And thank you for all those people who live in my house that I get to do laundry for. I put on a big old crock pot full of Taco Soup.  Thank you God for food, and for a loving family to have dinner with tonight.  I got ready to go to work.  Thank you God for clothes to wear, and for a car to get me to work, and for a job that you have blessed me with.  And thank you so much Lord for all the awesome people you have brought into my life through Down On The Farm.  I have "met" so many people that have blessed me, and I hope I have been allowed to bless them just a little bit.

Today, please look around you at all you have to be thankful for. And actually tell our amazing God how much you appreciate Him and all He has blessed you with.  And, if you are going through a difficult time, turn that situation over to Jesus.  He is bigger than anything in your life.  And He loves you.
Posted by Down On The Farm at 5/04/2011 3 comments:

Saturday night was Cole's Senior Prom.  Prom was held at the Lodge of the Four Seasons at Lake Ozark. I want to show you some pictures of the most gorgeous looking couple at the prom -- my son and his girlfriend, Megan.

If you think I am bragging, you are right.  My pride in my children knows no bounds. 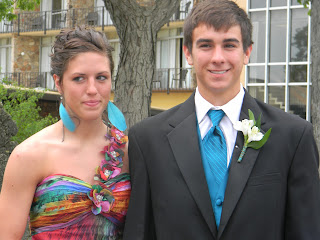 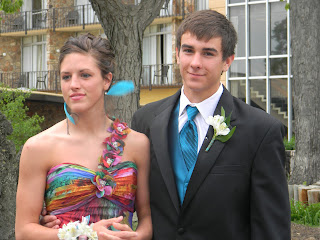 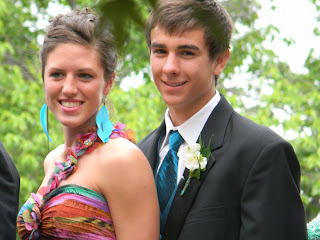 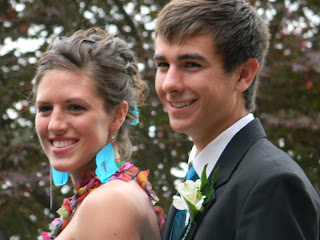 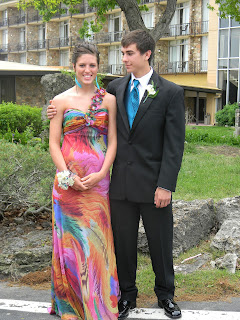