Praise the Lord.  It is raining at Down On The Farm.

It started raining this morning about 6:45, and it is still raining.

That is more rain than we've received since the end of June all together.

We are absolutely praising our God for allowing rain to fall on our parched ground.

Today the ponds are filling up.  Today the cattle are getting a bath.  Today my grass is getting a drink.

I thank you from the bottom of my heart for your prayers for us.  And I continue to pray for those affected by the hurricane.

I will have some "before" and "after" pictures to show you.  I am anxious to see what a difference the rain makes on our ponds and pastures.  And to see just how much rain we get.

Please continue to pray for us.  While we are so thankful for the rain today, and this is definitely a step toward the end of the drought, we still need rain this fall.  We are so far behind.

Praise the Lord for rain.  Amen.

I need your help my friends.

I need you to pray for rain.

I know that you have heard on the news about the drought that our country is experiencing.  I can tell you that Down On The Farm has been hit HARD by the drought.

We raise cattle, and cattle eat grass.  When it doesn't rain, there is no grass for our cows to eat.

When there is no grass for our cows to eat, we have to feed hay.

We don't have enough hay to feed our cattle from now until springtime.  Typically, we don't start feeding hay until MUCH later in the year.

Typically the grass grows in the fall and we cut hay again to make certain we have enough hay for the winter.  But NOTHING is growing here because it is so dry.

We refuse to let our animals go hungry.  We have sold cattle twice this summer, and if we don't receive some significant rains real soon, we will have to sell more cattle.  We can only keep as many cattle as we can feed.

I need you to ask the Lord to send rain to all the drought stricken areas, including Down On The Farm.

We were supposed to get rain this past weekend.  We got five one-hundredths of an inch.

We were supposed to get rain every week for the past three weeks.  We get a few sprinkles and that is it.  We have had less than 2" of rain since the end of May.  Things are getting serious.  We are desperate for rain.

I ask for your prayers for rain for everyone affected by the drought.  And I pray for those in the path of hurricane Isaac, who are getting rain they don't need.  I ask God to protect everyone in the path of that storm.

May God bless each of you.  And may God send the rain. 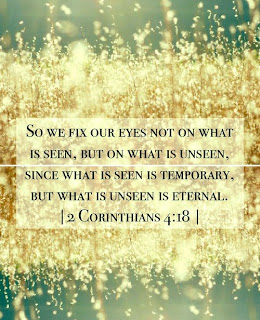 Why is this so difficult???

I mean really, this is TOUGH for me sometimes.

When I really can step back and attempt to view my life and every situation through God's eyes, things don't seem to matter as much.  Things that seem so important now, grow very, very small.

Because I know that years from now they will just be a distant memory.  And in heaven, they won't matter at all.

So today, why don't we all work on this.  Obey the Scriptures.  Fix our eyes on what is NOT seen.  Everything we see will one day pass away.  But what we can't see with our eyes, that is what is real.  That is what will last forever.

Jesus Is the Rock 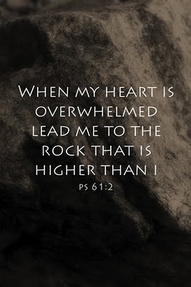 So many times I get my eyes on earthly situations, and earthly circumstances, and I think to myself "Wow, I don't know how on earth this is going to work out."

Or, if I'm honest with you all, I will admit that many times I think to myself "Wow, I don't know how on earth I'm going to fix this."

I CAN'T FIX ANYTHING!!!  But thank God He is the Rock.  His ways are higher than mine.  His plan is more awesome than anything I can even dream of.

So if you have a mountain in your life . . . or even an ant hill . . . get your eyes OFF of the situation, and your eyes back on the King of Kings and the Lord of Lords!

He spoke this earth into existence.  I KNOW He can handle anything that comes up in my life AND give me peace about it until it is resolved.

Thank you Lord that today, it isn't up to me.  Thank You that I can come to You with anything, and that You hear me and that You answer my prayer.  Please help me to worry less and trust You more.  Help me to keep my mind off of all the things that are going on around me, and keep my eyes completely fixed on You.  Thank You so much for all the blessings you pour into my life that I don't deserve.  Thank You for sending Your Son, Jesus, to die so that I can live.  I love You Lord.  Amen 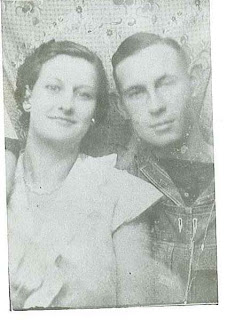 This is a picture of my paternal grandparents, Tom and Nellie.  This picture would have been taken in 1935, the year they got married.

After Grandpa Tom passed away, Gram Nell went to work in the deli at Gerbes in Jefferson City and worked there until she retired.  She never remarried.

Every year for my birthday she brought me a german chocolate cake from Gerbes.  I looked forward to those cakes like nobody's business.  My mom is allergic to chocolate, so that cake was my ONE chocolate cake of the year.

When I was a little girl I had very long hair.  Gram Nell didn't like long hair and, without my mom's permission, she took me and got my hair cut.  Bobbed just below the ears.  I hated it, but it grew back.

She also loved to pull teeth.  YUCK.  Once when I was at her house she chased me around the yard and when she caught me she pulled my tooth.  I told her I hated her.  I apologized many times over the years for saying that, and we even joked about it when I became an adult.  She knew I didn't mean it.  But it bothers me to this day.

She is the second oldest of eleven children and only has one surviving sibling, a sister who lives in Las Vegas.  It must be so sad to bury all your siblings, especially when, as one of the oldest, I'm sure she thought she would go first.  Is living a long time a blessing or a curse?

Today my dad and his sisters are putting my Gram Nell into the nursing home.  And she doesn't even know it.

She has been living with one of my dad's sisters the past couple of years, and physically is in good health.  But mentally she has been failing. And the past six months, she has really become confused.  Sometimes when I go see her she knows me.  Other times she doesn't.

In the last couple of weeks she has gotten much worse.  She is aggressive toward my aunt.  She is so confused.  As I said, she has no idea that tonight she will sleep in a strange place, among strangers.

We have no choice but to put her in a nursing home where she can be taken care of.  But it still hurts.  I love my Gram Nell. 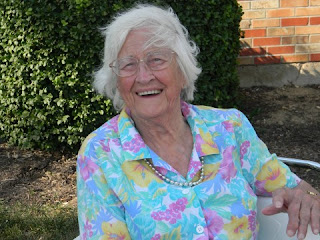 This picture was taken at my house in June at our family reunion.  Gram Nell was all smiles that day, and happy.  But later that day she was confused, and wondered where she was.  She does that a lot lately.

Sometimes people don't last long once they go to a nursing home.  I know that.  I keep thinking she will get better.  That I can get MY Gram Nell back.  And every day she gets worse.

I will go see Gram Nell in the nursing home.  And I wonder if she will know me.

My Gram Nell loves Jesus, and that is our comfort.  That no matter when He takes her, that I will see her again.  And she will be MY Gram Nell, the way she used to be.