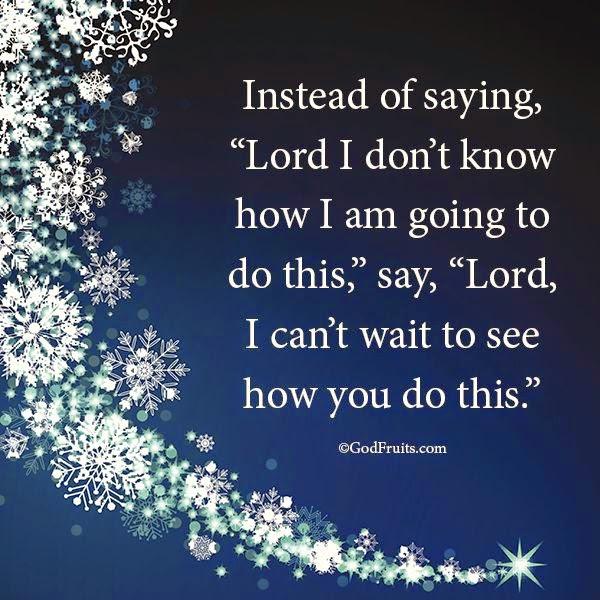 My prayer is to live my life with this attitude!!
I want to be a prayer warrior, not a worrier!!

I'm not sure if you are familiar with Kara Tippetts.

HERE is a link to her blog, Mundane Faithfulness.

Kara is a young mother of four and she battled breast cancer for two and a half years.

On Sunday, Kara received the healing she and so many had desperately prayed for.  Her Healer met her at the gates of heaven.

I do not know this woman.  And yet my heart aches for her and for the family she left behind.  Her children are young.  Will they grow up realizing how desperately their mother's heart ached for more time with them?  As the years go by, how many memories of her will remain in their minds?  And her husband.  Oh my goodness.  How do you go on when your soul mate is no longer here?  How does a man raise four young children on his own?

Their faith in God remained strong throughout Kara's illness.  Oh, did they have moments of thinking "why is this happening to us?"  I'm quite certain they did.  They were, after all, human.  But Kara decided early on in her illness to seek the peace of God.   I am reading her book The Hardest Peace now, and I can tell you it has stirred up my soul.

We are never promised that life as a Christian will be easy.  Christians have really bad things happen to them.  Christians get sick.  Christians have children who turn their backs on God.  Christians lose their jobs and their homes.  But Christians know that God is always with them.  Even in the valley of the shadow of death.  God met Kara in the deepest despair imaginable.  And He never let her go.

Kara was forced much too young to face what most of us deny.  That this life is temporary.  This life is short.  I think of all the time in my life I have wasted on things that absolutely do not matter, and I am ashamed.  Kara was able to, through the help of our Lord, savor every single second with those who mattered the most to her, her family, and her friends.

Several years ago there was a song called "Live Like You Were Dyin'" about a man who found out he had a terminal illness.  And one of the verses of the song says "Someday I hope you get the chance to live like you were dyin."

Friends we are all dying.  Every day is one day less that we have on this earth.  Are we living like it??

No, I do not think we need to go around in sack cloth and ashes.  I believe God wants us to live an abundant life.  But an abundant life focused on Him and what is important in His kingdom.

Today I am praying for the family and friends of Kara Tippetts.  I hope that as her story is shared others will see Jesus through the legacy she left behind.  And they will see that Jesus loves them as he loved Kara.  And I am praying for God to open my eyes to the reality that my time here on earth won't last forever.  I want to be all that He wants me to be.  I want Him to use me to help others.  I want to be faithful, as Kara was faithful.

Therefore we also, since we are surrounded by so great a cloud of witnesses, let us lay aside every weight, and the sin which so easily ensnares us, and let us run with endurance the race that is set before us,  looking unto Jesus, the author and finisher of our faith, who for the joy that was set before Him endured the cross, despising the shame, and has sat down at the right hand of the throne of God.

As you all know, our handsome son has already moved out and is getting married in May. Our beautiful daughter is getting married in July, and moving to Virginia. My mood fluctuates from being very excited about this new phase of life, for them and for my husband and me, and feeling like I've been hit with that big orange water cooler full of ice they show on football games. Our son still lives in our town, so while it is an adjustment, it will be much easier. Our daughter, well, I miss her already. Not gonna lie, the thought of her living so far away is just plain SAD.

The easy days of kissing the boo boos and sitting in the stands and helping with homework are over. Now comes the hard part. The decisions my children make now are life-altering, my advice even more important, my prayers even more fervent. Hardest thing in the world is accepting the reality that we don't have control in our children's lives anymore. We never really had control anyway, but we fooled ourselves into thinking we did. Now, that reality hits me like a cold shower. My children are adults. They don't need me like they did before, and yet, they need me now more than ever, just in a different way.

I so want God to use me to bring glory to Him. I want to transition with grace and step into my new role with a smile on my face. Some moms never make the transition and spend the rest of their lives mourning the growing up of their children. Lord Jesus, please don't let that be me. I want to be there for my children, and I always will be. But I also know that this is now a chance for my husband and I to focus on our relationship in a fresh way, and I truly look forward to that!!

Please agree with me in prayer for God to show me specifically what He wants from me in this new phase of my life. I want to serve Him.  I want to glorify Him.  I want to be His hands and feet.

And if you have any words of wisdom from your experience in transitioning, please share!
Posted by Down On The Farm at 3/13/2015 6 comments:

Saturday morning it was cold, and the snow began to fall and the wind began to blow and I new my husband and kids would be starving after a morning of moving turkeys.   I decided to make chicken and noodles for them for lunch.  I mean, who doesn't love chicken and noodles on a cold, snowy day??

And I used frozen noodles.

And I added chicken soup base as the seasoning.

And, wait for it, I added a can of cream of chicken soup to the pot for extra flavor. 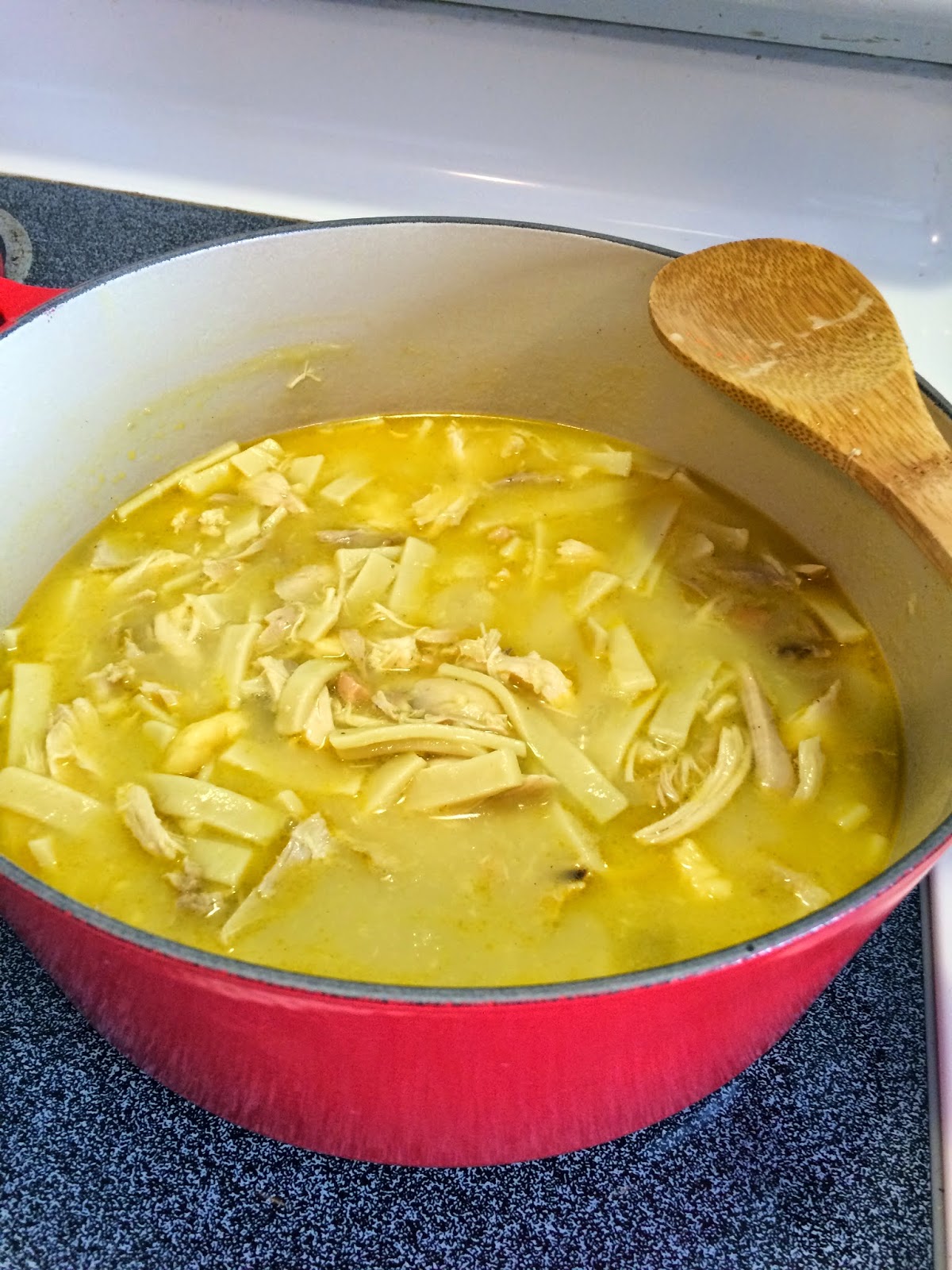 And you know what my husband and kids had to say about that?

They said, and I quote, "this is really good!"

Didn't bother them one bit that I didn't boil raw chicken and then shred it.  They didn't complain one bit that the noodles were frozen.  And that can of cream of chicken soup I added for extra flavor . . . nope they could care less.

And I've got to tell you a little story about this pot.
This pot is a Le Creuset . . . which is French for "REALLY EXPENSIVE."  I had wanted one of these pots for-EVER, but the price, well, let's just say they don't sell them at Wal-Mart.

So, I did what anybody would do, I found this pot at TJMAXX
at a price that while, still not cheap, was a lot less than the real price at say "Williams-Sonoma" and the price I was willing to pay because, after all, it's Le Creuset.  And I mean, food must really taste BETTER when it's cooked in this amazing French Le Creuset pot right??

See the big CHIP on the handle? 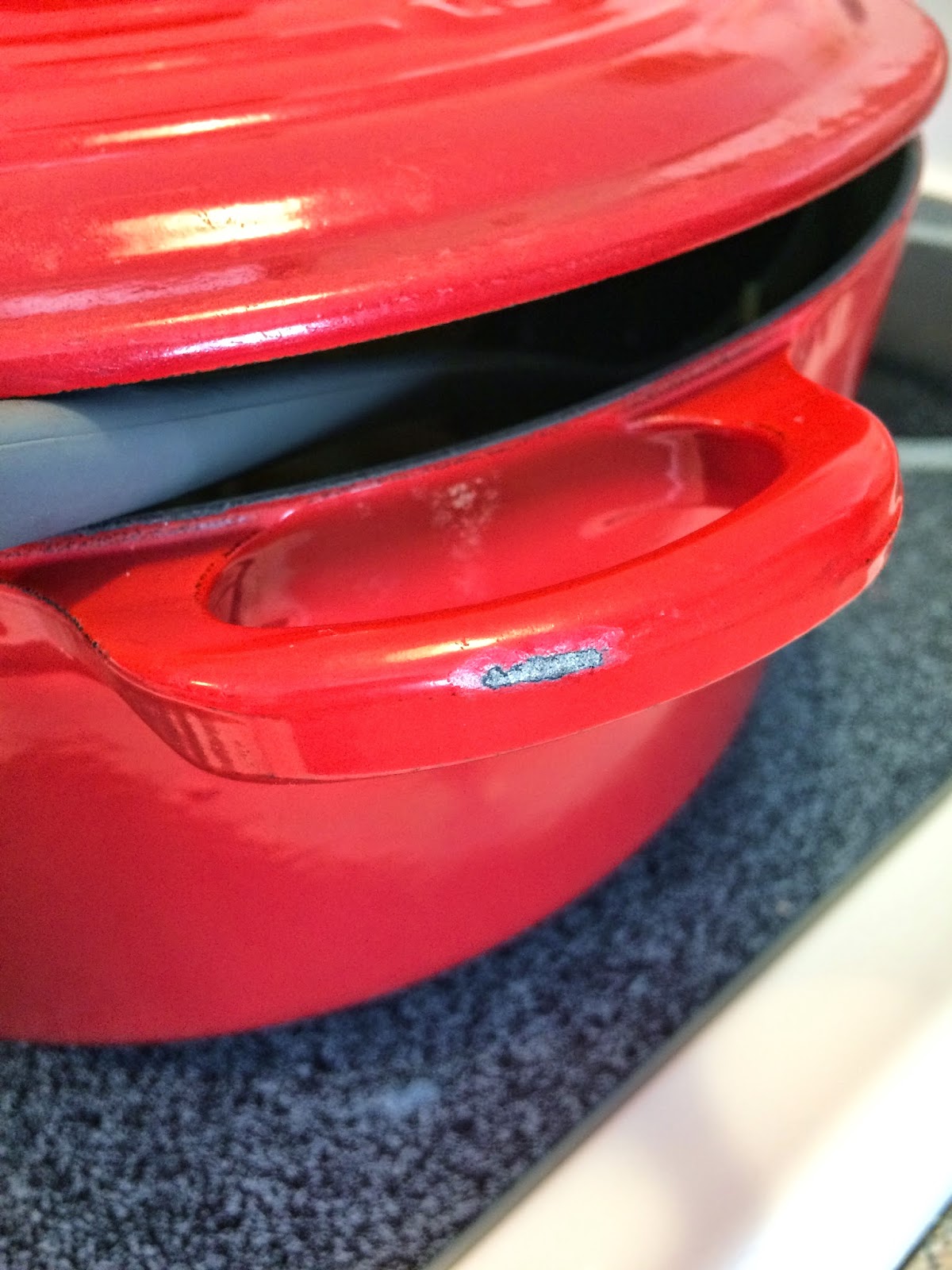 The big CRACK down the side? 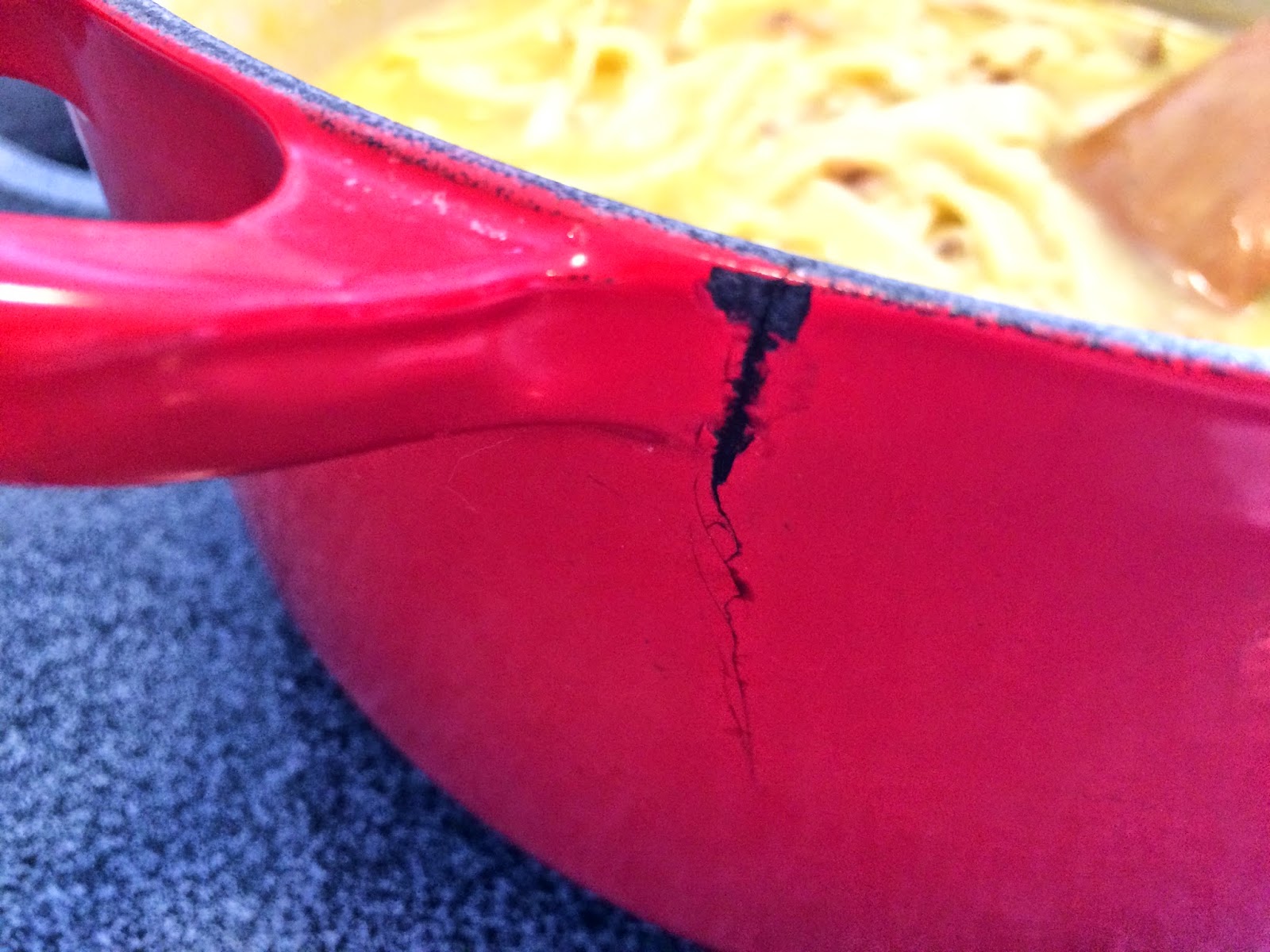 My first reaction, being totally honest, was not Christian at all.  I wish I could tell you that I smiled and said "don't worry about it."  But I didn't.  I was FURIOUS and trying not to act FURIOUS, but when you've been married as long as we have, well, he knew I was FURIOUS.  I wanted to scream HOW COULD YOU HAVE DROPPED MY NEW POT.

Now really, how sad is that.  I mean it's a POT for pete's sake.  He didn't drop it on purpose.  He felt really bad about it.

I think God works hard to keep me humble and remind me that stuff is just STUFF, even if it does have a fancy French name.  And so I still use that cracked pot with the big chip on the side.  And each time I use it I am reminded to focus on what is really important and let the small stuff go.  It's not easy, but I try.  Like using rotisserie chicken . . . . .