To truly appreciate the AFTER you have to have seen the BEFORE!  The bathroom looks completely different.


This long countertop (eight feet long!) had one sink in the middle, and one plain mirror on the wall.  We got a new countertop with two sinks.   And the bathtub, well, it is a five foot bathtub and it only holds water about six inches deep.  There was no shower at all, and a window over the tub.


We kept the blue tub.  I know, I know, I didn't want to.  But, it is cast iron and would have had to have been sawed into pieces to remove it.  We remodeled on a budget, working with what we had, so the tub stayed.  We also kept the 1968 white tile.  Not what I truly wanted but, again, the most inexpensive way to work with what we had.  The window had to go.  And it was replaced with a glass block "window."  Honestly, I love it!  It lets in light, while maintaining complete privacy and, I think it looks pretty COOL!


And, as an added bonus, I know have four receptacles instead of just two.  They moved the receptacles and centered them between the two mirrors.  So now, I can have the blow dryer, curling iron, and my electric toothbrush all plugged in at once.  I'm in heaven!!!

I also promised to give you the skinny on the cost of our remodel.  To recap, we kept the old vanity, and bought a new cultured marble countertop.  We kept the old tub and the old tile, we just plumbed a shower over the bathtub and replaced the old window with a glass block one.  The new cultured marble countertop was $625.00 installed.  It isn't granite, or marble, jor quartz, just good old "builder's marble" but I think it looks AWESOME!  I went with a granite "look" which cost me a little bit more, but it was definitely worth it.  I priced a new vanity and it was going to be about $800.00.  So, I decided the keep the old vanity and down the road I will try to find some new pulls for the drawers and doors.  We also had to buy two new faucets.  I went with oil rubbed bronze (LOVE THEM) and they were at Lowe's, $90.00 each.  PVC plumbing for the sink drains again came from Lowe's and was about $80.00.  I also bought two new mirrors at Lowe's, and they were $30 each.  Beautiful!

We hired someone to run the new plumbing for the shower, take out the old window and install the new glass block window.  He tiled up around the new shower and new window.  He purchased all of the tile and grout.  He purchased all the plumbing pipe and the fixtures, and he purchased the glass block window.  He also repainted the room and moved the electrical.  His cost, labor and materials, was $1,400.00.  The gallon of paint was $30.00.  I know, I thought $30 for a gallon of paint was high too, but I used a paint color from the house of a friend and no place else would match it.  Sooo, I had to go to Sherwin Williams, and the cheapest paint they had was $30 a gallon.  But, I will say I LOVE the color.  It looks so much more updated and gives the room a fresh look.  That makes a total of about $2,350.00 to remodel the bathroom.  Could I have spent more, absolutely!  But I tried to get the most bang for my buck and I believe I did.

I truly wish you could see the difference in the room.   It is so much more functional, and looks SOOOO much nicer.  I wish I'd done it years ago.  So, for those of you living in old ranch style houses . . . take heart!  A new bathroom is well within your reach!  Keep what you can, and spend on what will REALLY make a difference to you!
Posted by Down On The Farm at 6/23/2011 7 comments:

Summertime in Missouri is HOT.  HOT and HUMID.  And at Down On The Farm, summertime means garden time.  Our garden got a bit of a late start because it was so cold and damp, but it's doing great now.   These are green beans.  We LOVE 'em.  We'll probably can 150 quarts of green beans this year.  Have I mentioned we eat a lot of green beans? 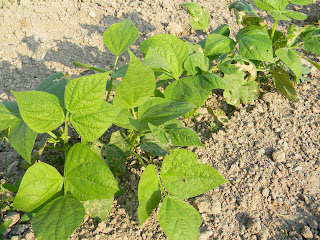 And since the cows get hungry too, we bale lots and lots of these babies. 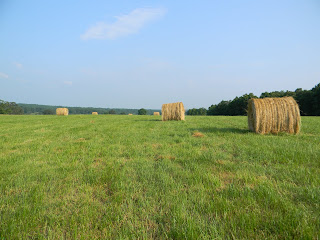 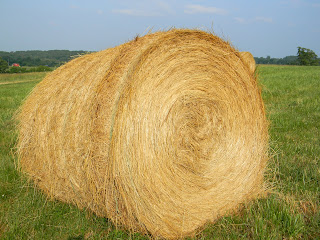 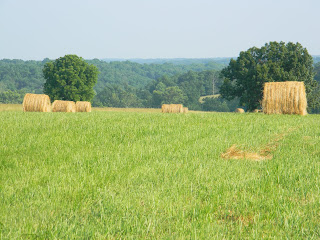 YUM!  At least I think that's what these cows are thinking as they look across the fence at the hay bales.  Doesn't that cow looking straight at you seem to be saying YUM?? 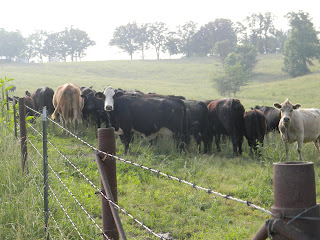 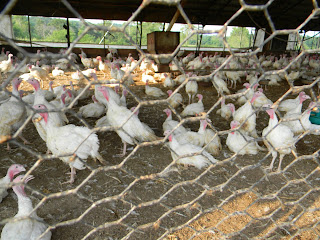 It is so pretty this time of year. 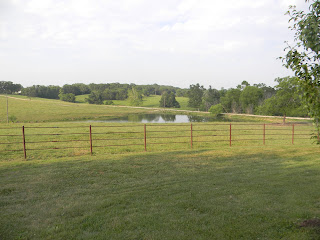 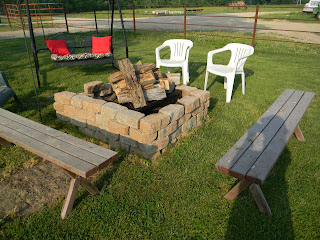 How about that corn?  Doesn't that look YUMMY!!!!  Later this year we're gonna grill some ears of corn over our fire pit.  After we freeze many, many, quarts of corn.  We ran out of corn this year.  We eat a lot of corn.  So we must freeze MORE CORN.  In fact, we planted three more rows of corn after I took this picture. 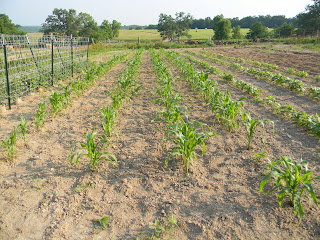 And these tomato plants.  WOW!  That is fresh salsa waitin' to happen people!!!! 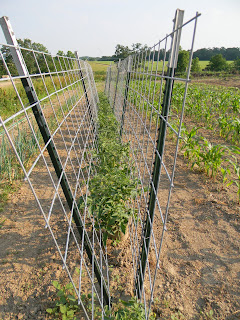 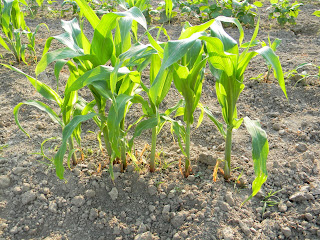 The bathroom remodel has begun.  But it sure is moving slowly.  I am pleased to report that the new countertop is in and, I absolutely LOVE IT!  I mean, going from one sink to two sinks has been heaven on earth.  And it looks SO MUCH BETTER than the old 1968 white formica flecked with gold countertop we replaced.

The walls have been painted and again, I LOVE IT!  It is a darker color, but I am loving dark.  It looks very sharp, and just "feels" good if you know what I mean.  I am considering painting all of my interior walls this color.

I'll try to snap some pictures tonight and give you an idea of our progress.  Meanwhile, we're WAITING on that glass block window!
Posted by Down On The Farm at 6/09/2011 5 comments:

Bathroom Before . . . and During

I live in a 1968 ranch style home.  To say the least, it is NOT on the cutting edge of architectural design (i.e. BORING!)  I mean, can you say "shoe box with rooms" :)!!!   Our house has two bathrooms.  Only one of those bathrooms has a shower.  Why would you put in a bathtub (and a small bathtub at that) and not make it a shower?  And furthermore, why would you put a window over the bathtub?  And, one more burning question, why would you have a vanity with an 8 foot countertop, and only put one sink in the countertop???   These are things I have pondered over the past 13 years we have lived in this house.
BUT THE BIGGEST QUESTION OF ALL IS -- WHY HAVE I WAITED 13 YEARS BEFORE DOING SOMETHING ABOUT THIS BATHROOM?????????????????
So, I'm not waiting any longer.  I am remodeling that bathroom!!!  Here are a couple of pictures of the "before" of this bathroom.  Now to clarify, we don't have a master bathroom in our house (built in 1968, remember?)  One bathroom is off the laundry room (that room needs a remodel too, but hey, one thing at a time).  The bathroom off the laundry room has a shower.  All four of us take a shower in that bathroom every day.  That is also the bathroom that the "men" in our house use to get ready in.  It doesn't have an electrical plug in.  Men don't need plug-ins.  The other bathroom is off of the hallway that leads to the bedrooms.  This is the "girls" bathroom. It has a plug-in.  Girls need plug-ins.  This "hall" bath is the bathroom that is getting a much needed facelift.  Sorry, back to the "before" pictures that I took last week. 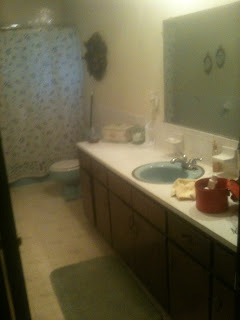 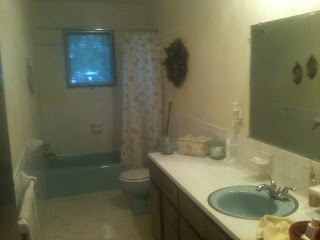 Here is one more shot of the 1968 formica countertop.  It is white flecked with gold.  Loooooovely. 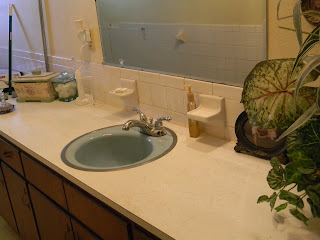 I'm sorry the first two pictures aren't so great.  They were taken with a phone, since the camera battery was dead.  Hey, I'm just being honest.  We refer to this bathroom as the "bowling alley."  It is about 13 feet long and 5 feet wide.  But you can see what I mean about the bathtub at the end of the room, and the window over it.  And you can see the LOOONNNGGG countertop with one sink in the middle.
So here's what is going to happen.  I am getting a new countertop with two sinks!  It is cultured marble, but looks like granite (saving money!).  I also bought two new faucets.  I LOVE THEM.  They are oil rubbed bronze.  I can't WAIT to get this new countertop in.  We are going to feel like we are on vacation.  No more pushing each other aside to spit while brushing our teeth!!!  This countertop should be installed over the weekend.  Our friend, the cabinet guy who ordered the new countertop, is going to put it in for us.  His cabinet shop is about 1/4 mile down the road from our house.  I've known him, and his wife, forEVER.  Isn't small town America great?
I am also putting a shower in where the bathtub is.  I use the word "I" loosely here, as "I" am not putting ANYTHING in.  But the guy we have HIRED is actually putting a shower in for us.  We are keeping the blue tub.  I really wanted to take it out.  It is NOT pretty.  But it is cast iron, and would have to be sawed into pieces to be removed, so, I'm living with it (i.e. saving money :))!!!  We are taking out the window that is above the tub and putting in a glass block window.  It had to be ordered, and probably won't be here until next week.  We are going to use the same white tile that is currently in the bathroom and tile up and around the plumbing for the new shower and around the new glass block window.  The glass block will still let in light, but allow for privacy.  Here is a look at the "during" part of the shower remodel. 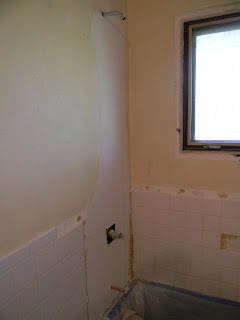 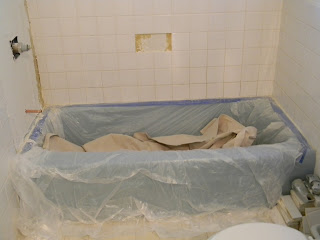 As you can see, the old window is still above the bathtub.  But, the rough plumbing for the new shower is in.  Once the glass block window is installed, the tile will be installed up higher around the glass block, and the fixtures for the new shower can be installed. I did not buy oil rubbed bronze fixtures for the shower.  They were much more expensive, and will be hidden behind a shower curtain so, once again, I saved a little money and just went with chrome. We are also painting the bathroom a different color.  (Again, I'm using the royal "we," as nobody in my house is applying paint to the walls of this bathroom.)
I am pretty excited about this remodeling project.  It is a small project as remodels go, but to us it is a big deal.  I'll keep posting pictures along the way and, when it is finished, I'll unveil the "NEW" bathroom.
Also, just in case you are interested, I'm gonna share the breakdown of the cost with you when we are finished.  I can tell you that we are definitely remodeling on a budget.  We tried to get the most "bang for the buck" if you know what I mean.  And I definitely made decisions based on what would be the least expensive way to accomplish our end result . . . and that is to make the bathroom more useable, and hopefully, look a whole lot better!  Stay tuned!
﻿
﻿
Posted by Down On The Farm at 6/02/2011 16 comments: