Last week was the Missouri State FFA Convention in Columbia.  If you ever get a chance to go to an FFA convention, trust me, it's an experience.  You will see more blue corduroy than you can imagine.  And lots of kids with smiling faces.  FFA kids are happy kids.
Cole was the Area VIII Winner in Beef Production.  That means he was one of the top 16 in the State of Missouri in this particular "contest."  FFA is all about contests.  Some kids are on teams for their "contest", and some kids enter "contests" individually.
Eldon's Parliamentary Procedure Team won first place AGAIN!  This is the team Cole was on last year that took first at State and FIRST IN NATIONALS!!!  And, Eldon's Ag Sales Team won first place at State!  WAY TO GO ELDON FFA!!!!!
Cole was announced on stage for winning Area VIII Beef Production. 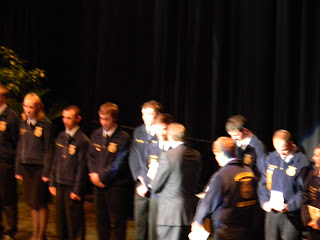 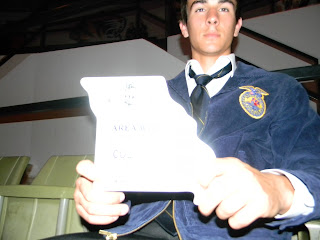 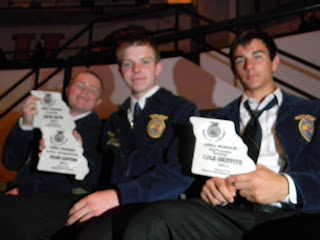 I wish these pictures were better, but it was dark inside the Hearnes Center, and it is HARD to take pictures in the dark.  Several kids from Eldon were Area winners.  Again, I am so proud of Eldon FFA.
Since Cole is a senior, this will be his last Missouri FFA Convention.  In a year and a half he will be on stage at National Convention accepting his American Degree.  WOW!!  Yes, we will be there, and I'll be taking pictures.  I hope you never get tired of seeing pictures of my kids :)!
﻿
Posted by Down On The Farm at 4/26/2011